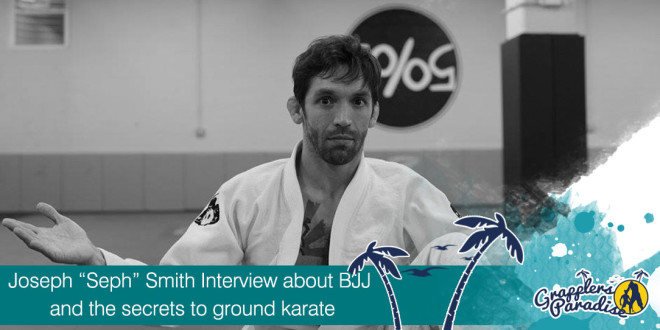 In a few weeks “Seph” Smith will hit the road and travel across europe to teach some seminars, in quest to open his new gym in Richmond Virginia. We talked to him about his trips and other important topics like the secrets to ground karate. (german version <–)

We want to start with a small introduction. So if you can introduce yourself to our readers in a few sentences.

Hi my name is Seph Smith and I am a black belt in BJJ under Ryan Hall. Currently I teach and train at Fifty/50 BJJ in Falls Church, Virginia and I am about to move to Richmond, Virginia in June to open my own academy called Upstream BJJ.

You´ve been around martial arts for a long time. Can you please describe your martial arts journey, which styles and which places you´ve trained?

I started training in February of 2001. When I started training I didn’t have a specific martial art that I wanted to take, I just wanted to train in something. The school that I started out training at was called Prodigy Martial Arts in Richmond Virginia. They offered a variety of different martial arts there, more so that I’ve ever seen since in one location. They had JKD classes, Kali, Muay Thai, Kung Fu, and BJJ. I started out training in all of them but after a short time I decided that I liked grappling the most and I started taking the BJJ classes exclusively. My first instructor was Dave Womack, who at the time when I started was a purple belt under Lloyd Irvin. I trained in Richmond from 2001-2005 and over that time I regularly would drive 2 hours north to train with Lloyd. Eventually I decided that I wanted to train full time and asked Lloyd if I could work at his academy. He offered me a job teaching and training at his school full time so in Nov 2005 I moved to Maryland. I trained at his school full time from 2005-2008. In 2008 I left Lloyd’s main location and began teaching at one of his affiliates where I trained almost every day with Ryan Hall. This was definitely a time where I took one of my biggest leaps in skill because of the time that I was able to spend training regularly with Ryan. In January of 2009 Ryan decided to leave Lloyd Irvin’s team and I went with him to help build Fifty/50 BJJ, where I have been ever since. Now this summer I’m going to be leaving Fifty/50 to open my own academy, Upstream BJJ back in my hometown of Richmond Virginia. Over the years I’ve competed in BJJ, Sombo, Judo, Nogi grappling, MMA, and XXXTreme Ground Karate (haha).

Besides being a blackbelt in brazilian jiu jitsu you also hold a second degree blackbelt in sambo. How does your sambo training transfer to bjj?

Sambo practitioners are very adept at Judo which is always an important skill to have in BJJ. Also they are known for their leg locks which again are incredibly useful, and often undertrained, and therefore can be a powerful equalizer against someone who is otherwise competitive or of a superior comprehensive skill level as you.

Is it beneficial for bjj players to train sambo as well?

No not necessarily but I think that training takedowns and leg locks are important for everyone.

We looked up some fights of yours as well as your great instructional vids for bjjstyle magazine and saw a lot of different attacks from you. How would you describe your style? What are your specialties and favorite moves?

I like to play on the feet. I love attacking with footsweeps and doing judo and I’d say that I prefer to be on top in competition if I can help it but I feel totally comfortable on the bottom as well. I’m not sure how to describe my “style” other than I try to be as smooth and non spazzy as I can be and I am always looking to improve my ability to use as little force as possible to control my opponent so that I can eventually grapple just like a three toed sloth. Leverage is key to sloth jitsu.

In competition or in the gym, what is your biggest accomplishment?

Honestly I’ve been competing in BJJ and other grappling tournaments for a long time now and I’ve won a few things here and there but I don’t have too many IBJJF medals to show. I placed 2nd in the Pans at masters brown belt in 2011, and I’ve won several NAGA, Grapplers Quest, and US Grappling titles. One of my better wins in the last few years was a win over Alberto Crane at the ADCC trials in 2012 I think. I have several matches that I’m proud of but I think that my biggest accomplishments thus far will be opening my own academy back home.

For the last 6 years you´ve been training and teaching at Fifty/50 BJJ, with Ryan Hall. Now you´ve decided to leave the gym and open your own academy. How hard was the decision to leave and what are your future plans?

It has always been a dream of mine to open up my own academy back home and it’s something that Ryan and I had talked about extensively over the years. Being able to be a part of Fifty/50 BJJ and to work at an awesome place amongst friends like Ryan and Jen Hall and the crew there has been incredible but I will be 35 this year and it’s time for me to move back home and move on to the next phase of opening my own gym, which I’ll admit is somewhat scary and simultaneously very exciting.

You said that you are going on a seminar tour across europe. What do look forward to the most about the trip?

Man I came to Europe in December for 2 weeks and had a blast. I did seminars in several different parts of England and one in Amsterdam. It was so much fun, and I got to meet some truly great people there. I have to say the thing I look forward to the most, seeing as I’ll be returning to Amsterdam, are the desserts that you can get all over the street. Stroopwaffels, donuts, and pancakes baby. But also I look forward to seeing new countries and meeting new folks in the European BJJ community.

Can you name any places you´ll be holding seminars? And if somebody is interested in a seminar, how can they get a hold of you?

I’ll be teaching 3 seminars in Iceland between May 13-18, Amsterdam BJJ on May 23rd, Basingstoke MA in Basingstoke UK on May 25, Paderborn Germany on May 29-30, Milton Keynes UK on 31, and in Liverpool UK at The MMA Academy Liverpool. Hopefully I’ll get a few more seminars lined up before I leave. If anyone is interested in hosting me you can contact me at sephsmithbjj@gmail.com or look me up Seph Smith on Facebook. For the time being you can also contact the academy at info@5050bjj.com

On the Fifty/50 BJJ Website it says that you´ve got “extensive experience and knowledge of coaching, personal training, and curriculum design”. How would you describe your teaching?

I’d say that I would like my students to focus on movement over moves. Being able to move properly and to connect different positions with movement transitions is the key. I want my students to be responsive and to have good movement. We’ve all grappled with or have been at some time that person who doesn’t move well and latches on to every grip that they get and I’d like to minimize that by focusing on efficiency and movement and things that are universal like how to create torque and apply maximum pressure in different positions and utilizing leverage.

Off the mat, what do you like to do besides training and teaching?

Favorite guard? Reverse De La Riva
Cats or sloths? Hmm, that’s a tough one. I’d have to say sloths though.
Best bjj fighter of all time? Tank Abbott
Candy or fast food? SOUR CANDY but stay away from the palm oil, the consumption of which is destroying the habitats of the mighty and magnificent orangutans.
Favorite bjj move? Hard to say but maybe nothing is as satisfying as a good foot sweep from the feet.

Is there any question we should´ve asked you and if “yes” what would be the answer?

Yes, What is the secret to Ground Karate? Answer, powerful KIAIS with every shrimp.

Thanks a lot for your time and best of luck for your Europe tour as well as the opening of your new gym. 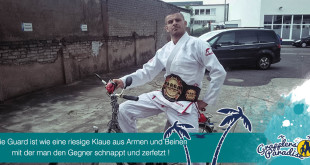