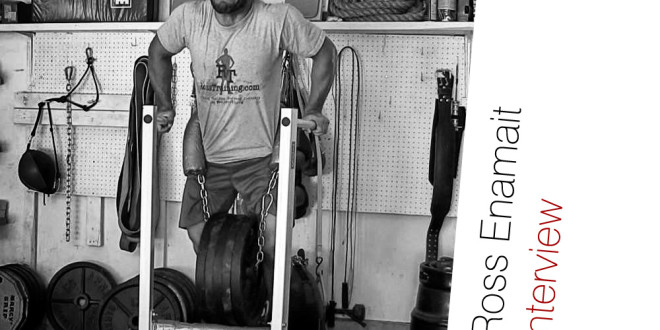 Ross from rosstraining.com is know for badass workouts, inspirational webdiscoveries and slick DIY training equipment. For our last issue he took the time to answer a few of our questions regarding figther fitness, battling through injuries, strength training and creating your own equipment. Thanks for his time and don’t forget to check out his site! 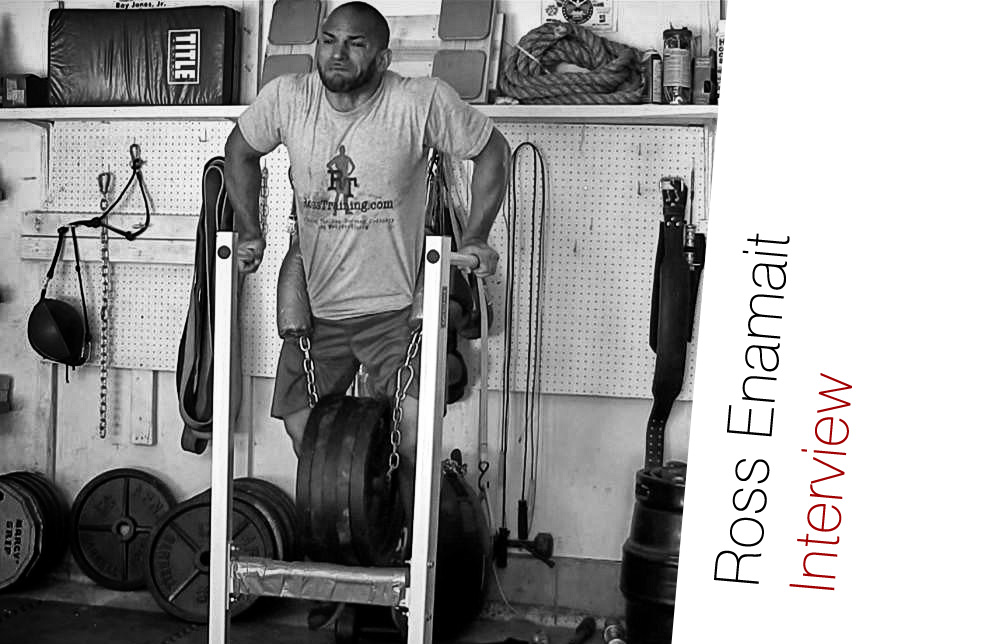 As a martial artist/fighter, how important is strength training for you and why?

I am not a big fan of generalizations. Combat sports are as individualized as any. No two fighters are the same. What makes sense for one fighter may not make sense for another. Several factors must be considered. For example, style and temperament between fighters often differ considerably. Consider the aggressive brawler who likes to bang on the inside compared to the slick fighter who prefers to stay outside and work behind his jab. The strength needs of these styles will often vary.
Natural ability is also relevant. I have seen fighters walk into the gym on their first day who are already strong for their weight class. Such a fighter doesn’t need as much strength training. Perhaps he is lacking in other areas however. For example, some naturally strong fighters struggle with late round endurance. The ideal program for such a fighter would differ considerably from another fighter who is being overpowered when fighting on the inside.
In summary, strength training can certainly be useful, but the individual needs of the fighter must be considered. No fighter should follow a generic, cookie-cutter program that isn’t created with his needs in mind. Coaches must cater their training based on the uniqueness of the individual, as opposed to telling everyone to blindly follow the same path.

You are big into DIY equipment, which is the one tool every martial artist should build?

It is difficult to label a single piece of equipment as a necessity for all. Using myself as an example, I have built many homemade tools that have been quite valuable. I couldn’t say that one ranks above all others however. As with the previous question, the value of a particular tool will vary depending on the needs of the individual.
For example, I have built homemade tools designed to enhance grip strength. I’ve built others that develop the neck. I’ve also built tools that target the posterior chain. I could go on and on with examples. To suggest that one stands out above all others would be misleading.
If I was forced to make a single suggestion however, I’d like opt for a heavy odd object. A sandbag would be an ideal choice. Sandbags can be quite useful for combat athletes, particularly those who engage in ground fighting. Heavy sandbags develop a unique type of real world strength and endurance that can pay huge dividends inside the ring or cage. 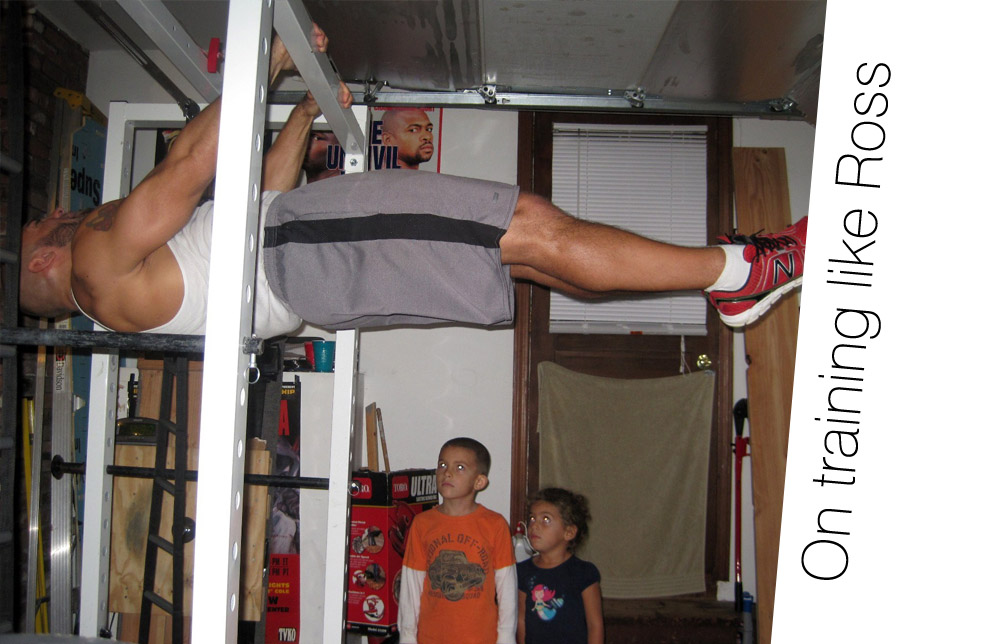 Why should a martial artist incorporate a training regiment like you?

No one should train like anyone else, without first determining what exactly they need to improve. The fighters I train don’t necessarily train like me. Rather than having them follow what I do, I instead determine where they are lacking and make decisions accordingly.
The legendary Angelo Dundee summed it up very well when he said the following about fighters,
“There’s no two alike. You don’t say, ‚This guy fights like this guy.‘ They don’t. They’re all individuals. They all got their own idiosyncrasies, got their own rhythm. I’ve never seen two of the same fighters.”
With that in mind, a trainer shouldn’t just have everyone train the same way. It doesn’t work that way. The trainer needs to analyze each fighter separately. It’s important to study them in and out of the ring. Find out what they are good at and where they need to improve. Find out what is going to make that individual a better fighter based on the tools that he has and is capable of developing.

In our last issue we asked several fighters how they deal with injuries. They either work around, or try to go with light intensity. What are your thoughts on this and how do you adjust training once you, or someone you train, gets injured?

As with the previous questions, I wouldn’t offer generic advice regarding injuries. Obviously it is nice to work around an injury if possible but doing so isn’t always feasible. It is important to understand that fighters naturally want to fight. It is this type of person who is often willing to work through an injury. Unfortunately, doing so can often lead to more significant problems. I’ve seen this not only as a trainer, but it was a problem that I dealt with personally as a young fighter.

One of the reasons that I transitioned to coaching was that my hands were failing me as a fighter. Like many youngsters, I was ignorant and impatient. I just wanted to fight. When I broke my right hand the first time, I rushed back into action too soon. All that I was worried about was getting another bout. I ended up breaking the same bone three times in one year. I also broke my arm and had wrist problems. My own impatience got the best of me. I never took the time to rest and rehab properly.

I’m not sharing this story to suggest that you can never work around an injury, but it’s important to know the significance of the injury. In addition, not all fighters will admit how bad something is. A trainer needs to know exactly what is wrong. He also needs to know if his fighter is hiding an injury. When I was younger, I’d always say I felt great even when I could barely close my hand. Once again, my own impatience was my downfall at the time. It’s made me a better trainer however as I can now steer fighters away from making the same mistakes that I did many years ago. 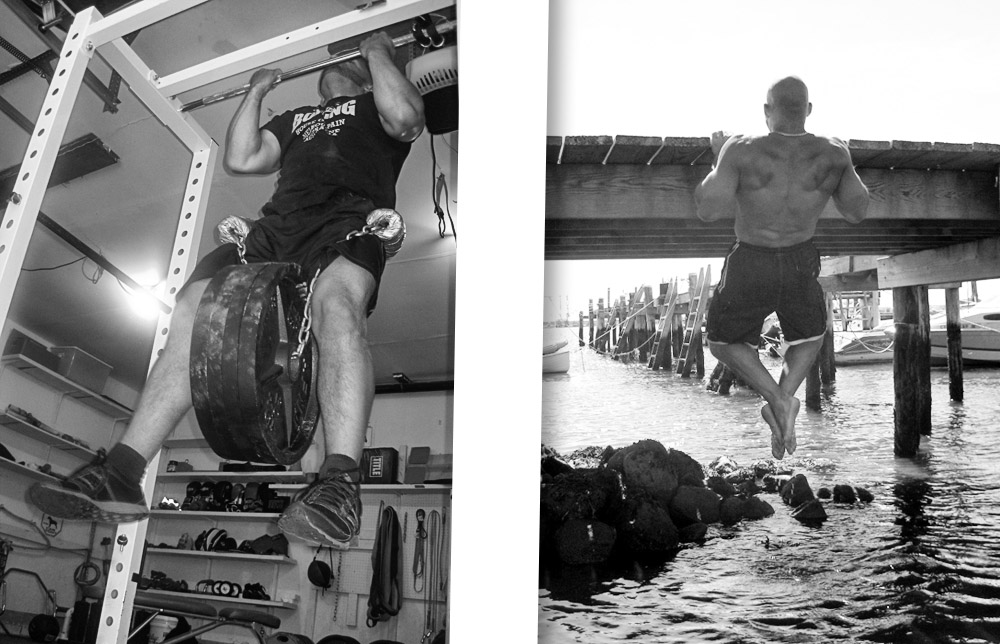 We have been inspired by your motivational posts with age related fitness, our question would rather be, how do you get from the state of motivation to the state of doing?

I’ve never been a big fan of motivation. Personally, I’ve always thought of passion as a much more powerful engine. If you are truly passionate, the motivation to pursue such passions will already be there. Too many people make the mistake of searching externally for motivation. It’s great to be inspired by someone else, but don’t confuse inspiration with motivation. True motivation starts with passion. You find passion by looking inward to determine what really matters to you. Motivational tricks will only last so long if you don’t really want whatever it is you are being tricked into wanting. If you are passionate however, you won’t need motivation. The fire will already be lit and you’ll do whatever is necessary to keep it burning strong.

What are you up to at the moment and what can our readers expect to see from you in the next weeks?

I’m always busy in the gym training myself and others. In addition to that, I’m continuously working to add more useful content for the readers of rosstraining.com. I’m extremely passionate about what I do so it never feels like work to me. I wake up each morning fired up and ready to go.

Thanks for your time, is there anything that we should have asked you but missed?
No problem at all and feel free to email me any other questions at ross {aehtt} rosstraining.com. Thank you for the opportunity.